IBF organizes Uppsala Lecture in Housing and Urban Research evey year. The lecture is held by an internationally leading scholar in housing and urban research.

This year's lecture: "Urban Ideology in the New Gilded Age" Margaret (Peggy) Kohn is a Professor at the Department of Political Science, University of Toronto. Her primary research interests are in the areas of the history of political thought, critical theory, social justice, and urbanism. Her most recent book The Death and Life of the Urban Commonwealth was published 2016.

Abstract for the lecture

This lecture explains why the concept of ideology is a useful tool for critical urban studies It advances an approach that is distinct from Ideolgiekritik: the Marxist-inspired method of showing that ideas of justice, right and freedom disguise and obscure class interests. An ideology is an explanatory framework that informs normative judgement, fosters political identity, connects these features to a program of action. Neo-liberalism provides a paradigmatic illustration of a political ideology, and important scholarly work has demonstrated its impact on cities and urban life. If ideology is a way of dividing the political world into poles that citizens can understand, then we must ask about the alternative to the neo-liberal city. I examine two approaches to this question: the influential rights-based approach and the solidarity-based alternative. Solidarist ideology provides a justification of strategies of decommodification that are crucial for flourishing urban life.

About Uppsala Lecture in Housing and Urban Research

Uppsala Lecture in Housing and Urban Research is awarded to internationally leading researchers in residential and urban research.

With Uppsala Lecture in Housing and Urban Research, IBF wishes to make visible and stimulate housing and urban research of the highest quality - locally, nationally and internationally.

All Uppsala Lecture lectures are filmed and published at the University's film channel.

Here you will find all the collective film material from Uppsala Lecture
You can also click on the individual film links below. 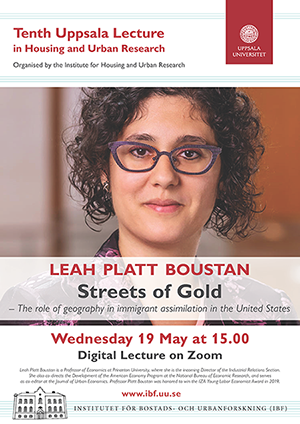 VIDEO: Streets of gold: The role of geography in immigrant assimilation in the United States 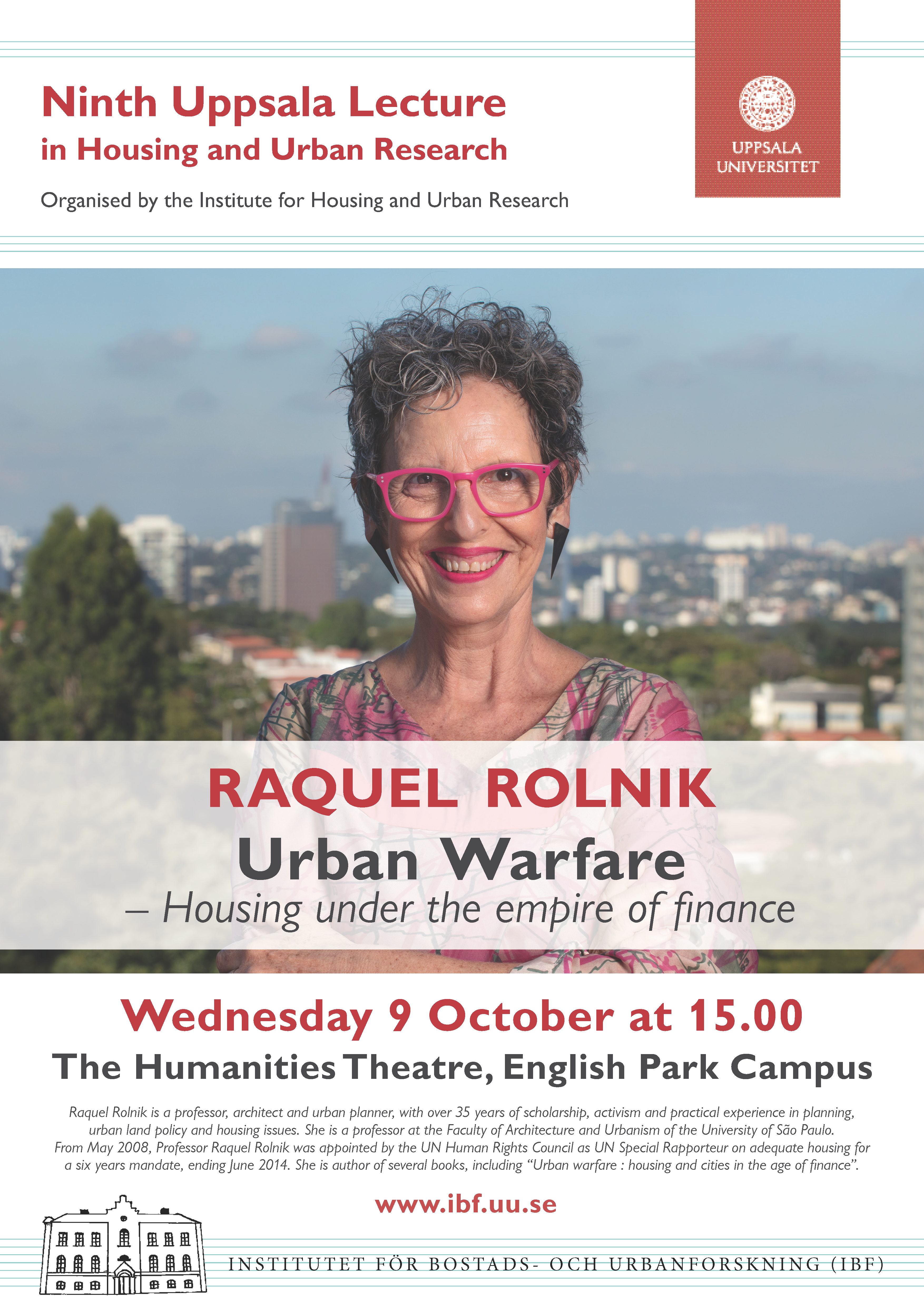 VIDEO: Urban Warfare – Housing under the empire of finance

Raquel Rolnik is a professor, architect and urban planner at the University of São Paulo. From 2008 to 2014, professor Rolnik was the UN Special Rapporteur on the Right to Adequate Housing. She has written several books, including “Urban warfare: Housing and cities in the age of finance”, on which she based her lecture in Uppsala. 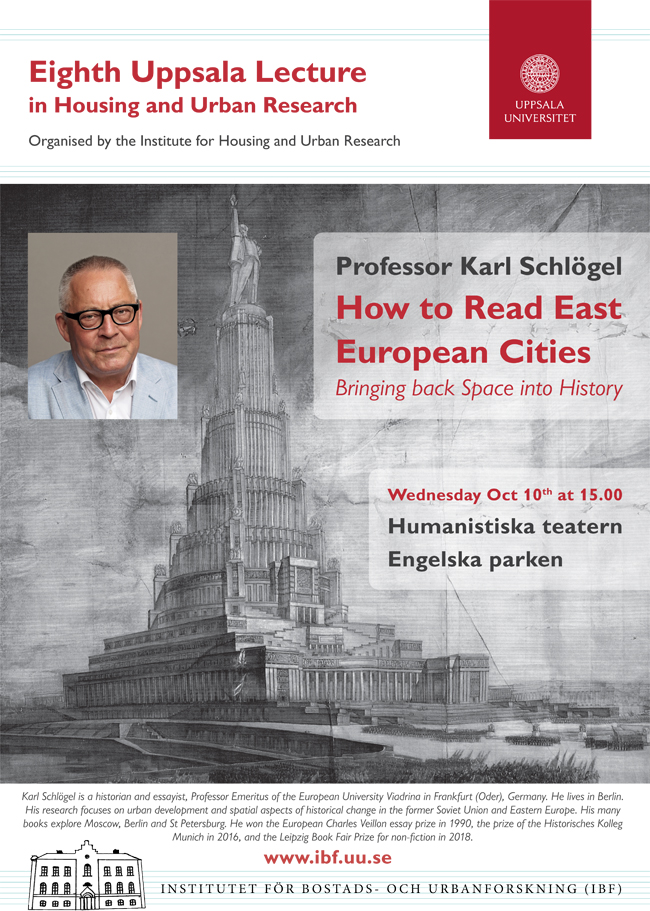 VIDEO: How to Read East European Cities – Bringing back space into history 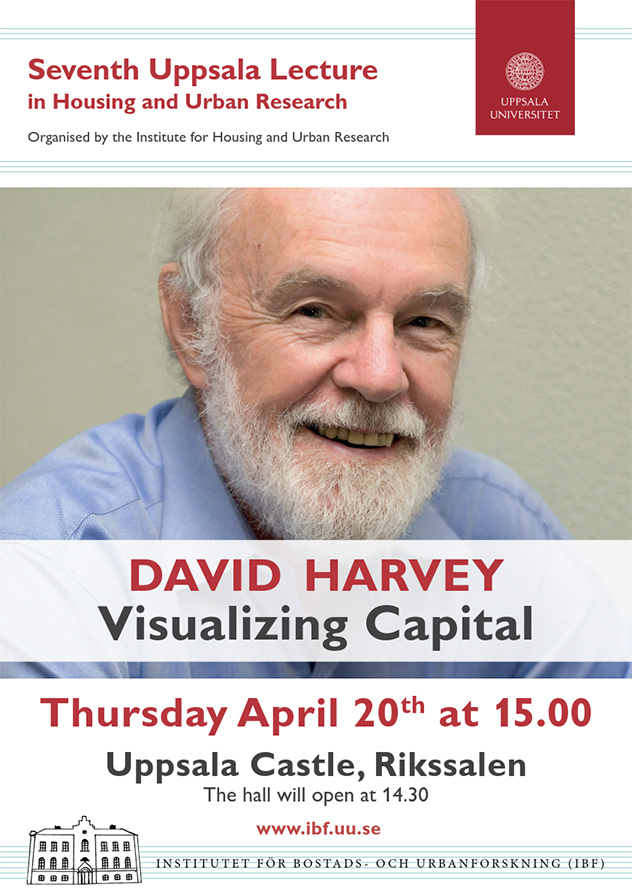 David Harvey is a professor of Anthropology and Geography at the Graduate Center of the City University of New York (CUNY) and an internationally leading theoretician within the field of urban studies.In 1960 and 1961, Harvey was postdoctoral researcher at the Department of Social and Economic Geography at Uppsala University, and in 2000 he was conferred the title of honorary doctor at the University. 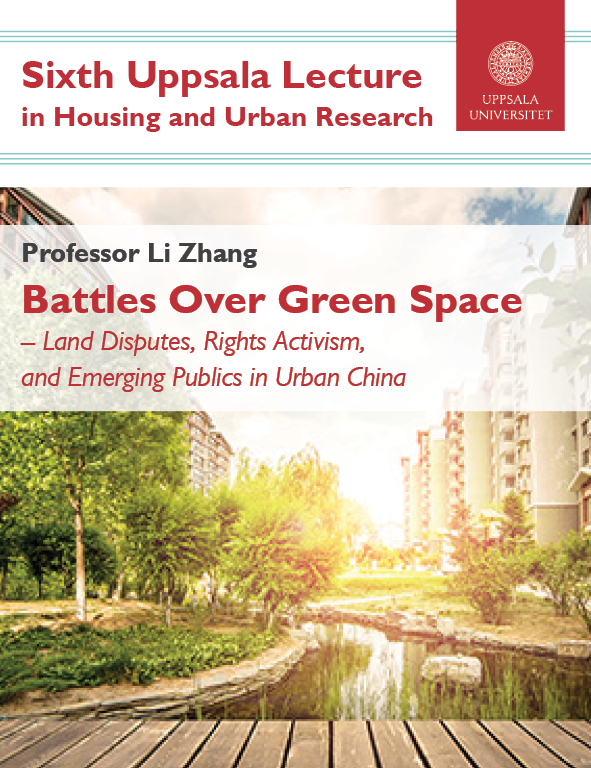 Li Zhang is a professor of Anthropology and Acting Dean of the Faculty of Social Sciences at the University of California, Davis. Her research deals with the social, political and cultural effects of market reforms and social transformations in today’s post-socialist China. 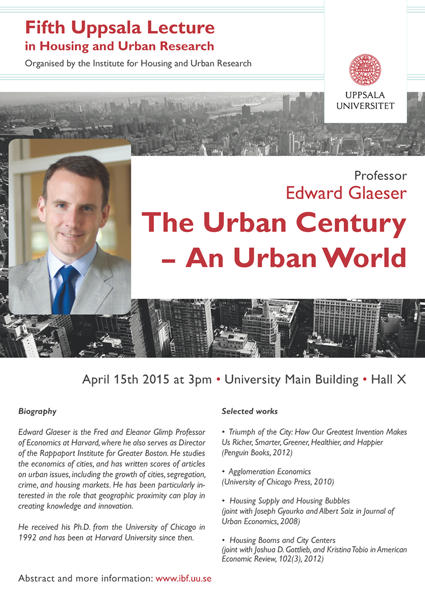 Edward Glaeser is a professor of Economics at Harvard University. He has introduced several theories within urban geography, price theory and poverty. 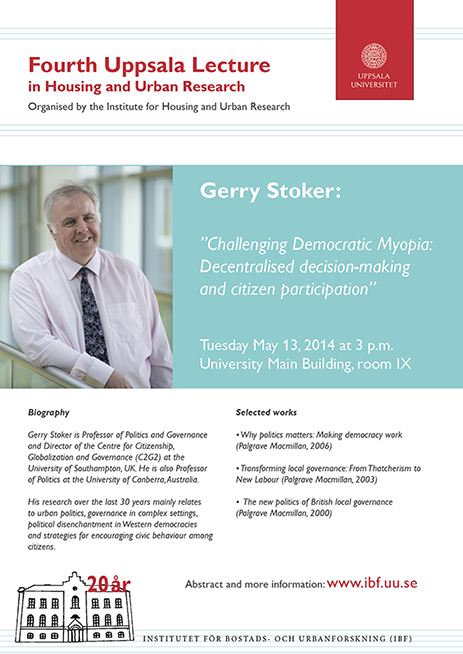 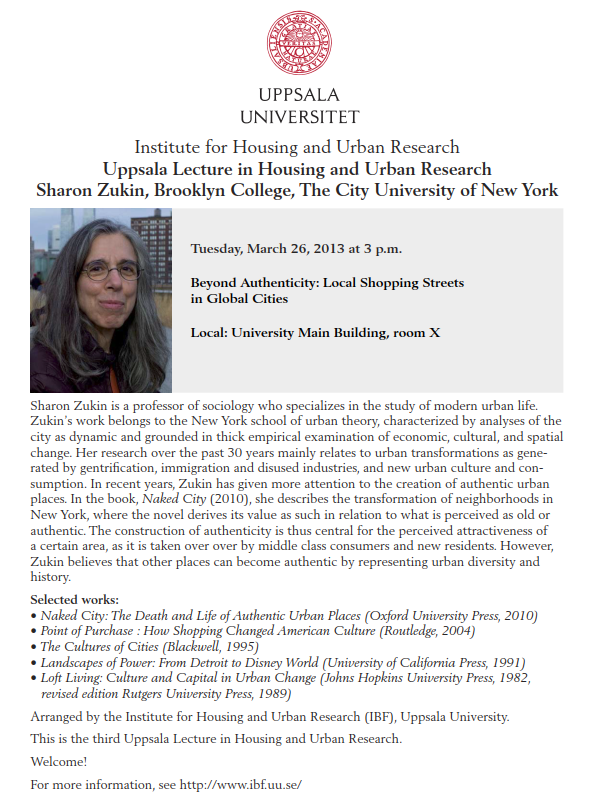 Sharon Zukin is a professor of Sociology at Brooklyn College in New York. Her book “Loft living” (1982, 1989) is considered ground-breaking. 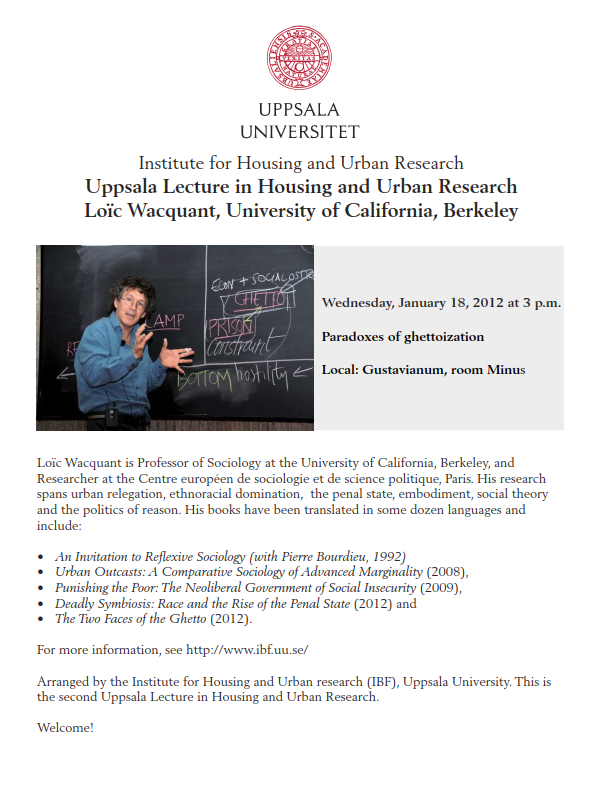 Loïc Wacquant is a professor of Sociology. He is active at the University of California, Berkeley and associated with the Centre de sociologie européenne (CSE) in Paris. He has researched on ghettos and prisons. 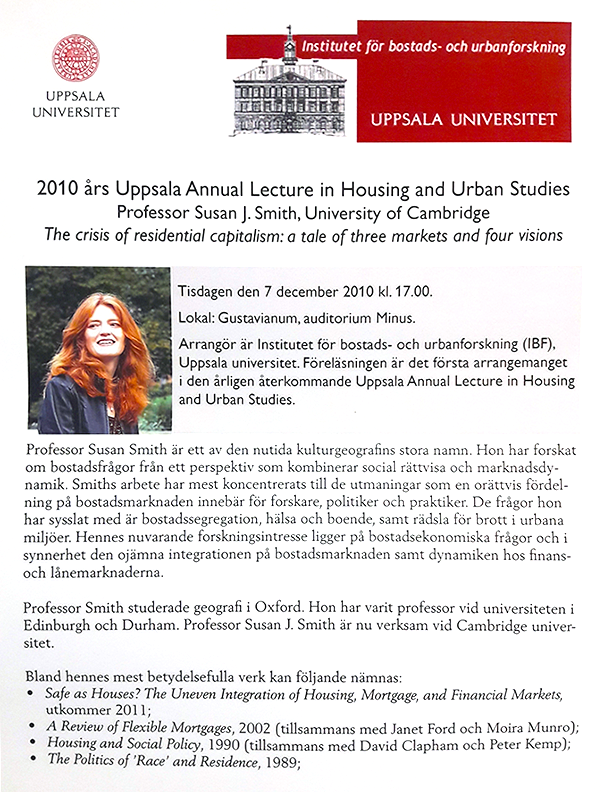 The crisis of residential capitalism: a tale of three markets and four visions

Susan J. Smith is a Professor of Social and Economic Geography at the University of Cambridge. Unfortunately, her lecture was not recorded.